Read the article about Sarah’s announcement.

You did it, Titans! You were the key to our success.

This video captures a few successes from #AllInforWesleyan. Check out the social media activity and revisit iwu.edu/all-in to see how your gifts made a difference. Check out the All-In Happy Hours taking place around the country.

Show your Titan pride by spreading the word about All In for Wesleyan to your personal networks via social media, calls, texts, emails, etc.

You’ll have a great time while encouraging others to make an additional gift on All In and share stories about how IWU Unlocked Opportunities for each of us.

Visit our webpage for more information and registration. Visitation will be from 4 p.m. to 8 p.m. today at Clancy-Gernon Funeral Home in Bourbonnais and from 10 a.m. tomorrow, Friday, Jan. 25,  Interment will follow at All Saints Cemetery in Bourbonnais.

Donna (Makarowski) Laib, a nursing major ’97, passed away from complications related to a lung transplant on 12/31/18.  She had a deep faith and was a light to all those that loved her.  More information is available here (registration required.)

Inspired by her daughter, Sabina Khan ’97 shines a light on LGBT Muslim teen experiences in her debut young adult novel.

Published by Scholastic Press, The Love & Lies of Rukhsana Ali follows a Muslim-American teen sent to her parents’ native Bangladesh after they discover her relationship with a female classmate. The novel draws upon the experiences of Sabina and her daughter, who came out at 17.

It was listed on many anticipated reads lists ahead of its Jan. 29, 2019, release, and was included on a list of best young adult reads from Seventeen Magazine. It is widely available. 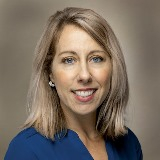 Hi, I'm Karen, the Class of '97 Newsletter editor. Send me an email at karen.carlson@lrs.com if you have an update!