Jean Gaines ’53 reports that she has eight grandchildren and welcomed her first great-grandchild on May 1, 2019. She lives at The Mayflower Retirement Community in WinterPark, Florida. She enjoys hearing from her old classmates and friends!

We are saddened to inform you that Helen Mae LaCroix (Johnson) ’53 passed away February 10th, at the age of 88. She was born on January 22, 1932 in Chicago. At Illinois Wesleyan University she met Chuck LaCroix, and during their marriage the two had five children. She was a wonderful mother who valued the time she had with her loved ones. Her art has been exhibited in several art galleries, and she taught workshops at Gorton Community Center. She is survived by four children and four grandchildren. We regret to inform you of the passing of Robert Conrad Price ’50, who passed away peacefully in his home surrounded by loved ones on January 25, 2020. Here is his full obituary. Charles Gaines ’53 ’54 died Nov. 11, 2018. He was 86. Charles studied music at Illinois Wesleyan, where he was active in many music-related organizations and professional societies, and earned both bachelor’s and master’s degrees at IWU. He taught elementary school music and managed church music programs in Illinois and, later, New York, while he pursued a doctorate from Union Theological Society. Charles began his academic career at Presbyterian College in Clinton, South Carolina, in 1965. He remained chair of the school’s department of fine arts until shortly before his retirement in 1998. He also served as director of music for the First Presbyterian Church of Clinton and the First Presbyterian Church of Greenwood, South Carolina, and founded and directed the Laurens County (S.C.) Chorale. Former South Carolina Governor Mark Sanford conferred The Order of the Silver Crescent, the South Carolina Legislature recognized his leadership in a proclamation, and the mayor of Greenwood later proclaimed June 15, 2012 as Charles T. Gaines Day. Charles is survived by his wife Jean (Reichert) Gaines ’53, three children, including Deborah (Gaines) Abbott ’76 and Betsy (Gaines) Bone ’82, and eight grandchildren.

We regret to inform you of the passing of Dale D. Garrett ‘50, who passed away on December 29, 2019. Read Dale’s full obituary here. We are saddened to inform you that Dorothy Faughn (Stokes) ’47 passed away on January 5, 2020. Dorothy was the proud mother of 4 children and a legendary band director in Malden, Missouri. She is missed by former students, church friends and her children. She had wonderful memories of her time at IWU. A Celebration of Life is planned for 3:00 p.m. on Saturday, January 19, 2019 at Schweitzer United Methodist Church. A reception will be held in the Memorial Hall following the service. 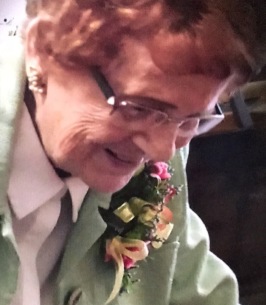 Warren J. Gitersonke ’51 reports that he reached the young age of 90 on October 24, 2019 and enjoys good health. He plays golf at least once a week and really enjoys playing his clarinet and saxophone in the South Ft. Myers Florida Big Band, which plays music of the 30’s and 40’s. Glad to hear from you, Warren!

Dr. Jill Waldron ’58 reflects on the many things she is grateful for at IWU, including: the excellence of the education, the library, her professor of poetry Ms. Ogle, her Economics and Philosophy professors, the Art Department, the small classes, and the chance to succeed. We are grateful for her, too!